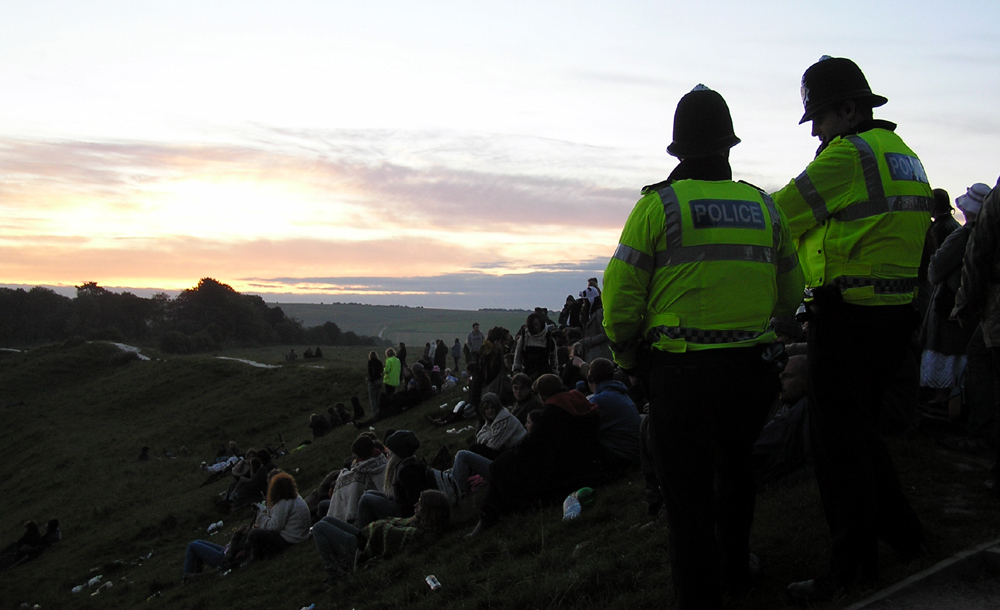 Avebury is situated near to the Marlborough Downs in Wiltshire in the west of England, and is one of the most complete prehistoric complexes, including -
The West Kennet Avenue, The Outer and two inner stone circles, Windmill Hill, The Sanctuary, West Kennet Long Barrow and Silbury Hill.
The Avebury Circle is thought to have been built before Stonehenge. The Sarsens used are local unworked stones selected for their shape, some weighing as much as 40 tons.

The amazing Avebury's Neolithic temple never fails to stun visitors as they experience its staggering monuments, and feel the power of the ancient natural and spirital energy that flows around the circle and surrounding complex.

Magical myths abound about the stones :

The Swindon Stone apparently revolves on its own axis at midnight and sometimes crosses the road.

Running 100 times anti-clockwise round The Devil's Chair Stone will summon up supernatural powers or even the devil - young women used to sit on the ledge on May Day Eve (Beltane) and make a wish.

When electronic items are used near the ancient ley lines that run through the village they mysteriously fail. The magical ley lines are known as Michael and Mary, and cross near the stones in the southern part of the circle.

As with Stonehenge we can only guess at what happened at Avebury - seasonal celebrations such as at the solstices - so important to agricultural communities, rituals to honour the dead, ceremonies communicating with the powerful forces of nature, worship of the sun and moon, fertility rites... as the midsummer sun rises over Hackpen Hill the mystery continues...

September 23rd 2006 - Autumn Equinox celebrations. It was a warm sunny day and there were plenty of visitors enjoying the beautiful stone circle at Avebury. The Loyal Arthurian Warband celebrate the Autumn Equinox or Alban Elfed. 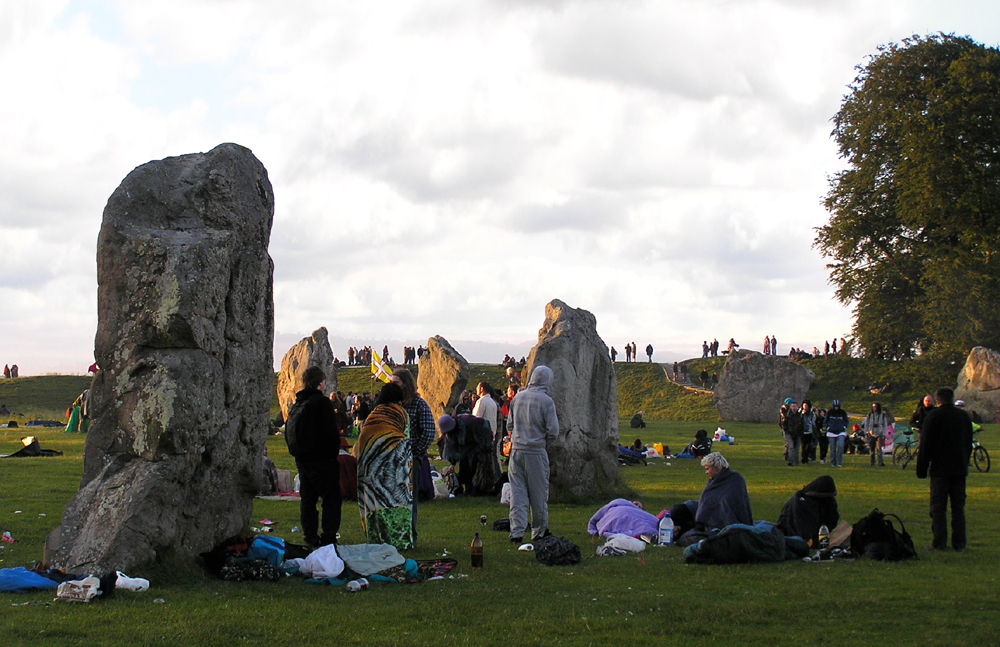 It is thought that 98 huge stones once made up Avebury's outer circle, now only 27 remain.

Many standing stones were removed over the centuries by locals for building material and to make way for crops.

The church encouraged the dismantling of circles as Avebury was such a powerful pagan site.

Huge pits were dug underneath the massive Sarsens and fires lit, causing the stones to crack. Also some stones were buried, which ironically has safeguarded them from being destroyed in later years as building material.

The missing megaliths are now represented by concrete plinths, such as in the centre of the Southern Inner Circle where a tall 20ft menhir weighing near 80 tons - The Obelisk - once stood. This towering stone is thought to have been the ceremonial central point of Avebury.

John Aubrey, an amateur 17th century archaeologist, recorded most of the layout of stones and William Stukeley, an antiquarian, measured many of the stones before the destruction of much of the site.


Aubrey wrote that Avebury does 'as much excell Stonehenge as a Cathedral does a parish church'.

During the 1930s marmalade millionaire, Alexander Keiller, bought part of Avebury village and restored some of the buried stones to their original positions. 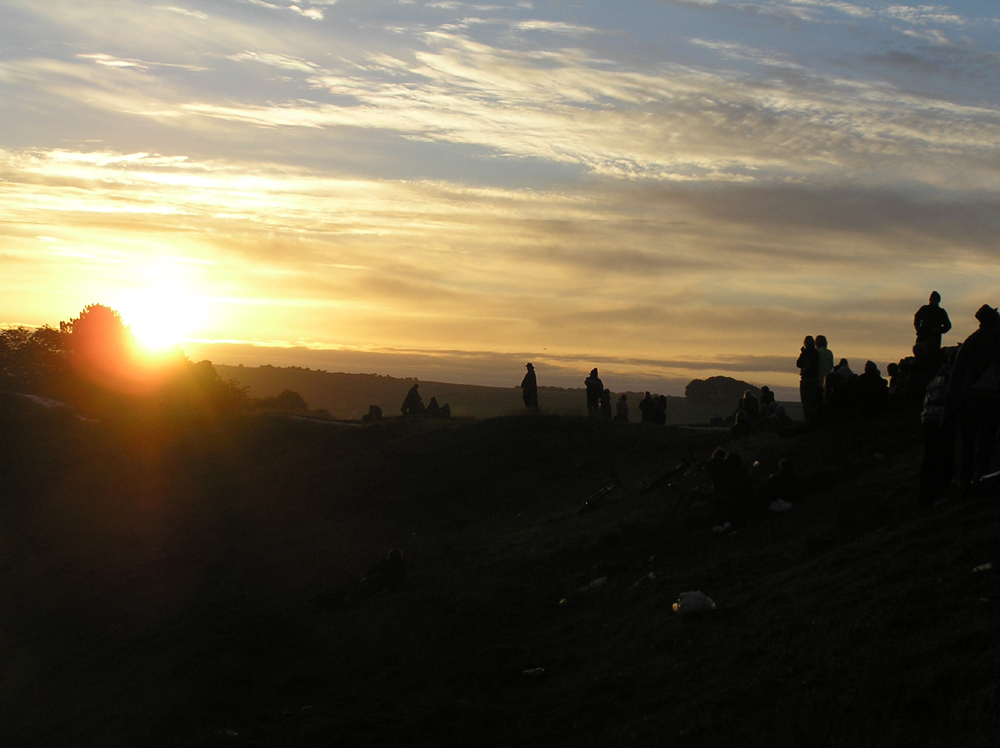 A male skeleton was discovered under a fallen Sarsen and dated by coins to the early 14th century. He was believed to be a barber-surgeon due to a pair of scissors and medical probe, and was probably involved in bringing down the stone. He remained buried under the 13 ton megalith until 1938. This accident may well have deterred the villagers from further destruction of the powerful monuments.

Was re-assembled from fragments found in a forge. The iron wedge that had been used to break up the megalith remains embedded in the base.

Has a ledge inside the hollow.

This consists of two standing stones which were thought by antiquarian William Stukeley to have been aligned to the moon's most northerly rising point. He named the northern inner circle - luna circle. Others believe the stones are aligned to view the midsummer solstice of the sun. There used to be a third stone at the north side which faced the existing tall 'male' stone.

This great stone is thought to weigh 65 tonnes and marks the northern entrance. It is one of the few Avebury megaliths that has never fallen. 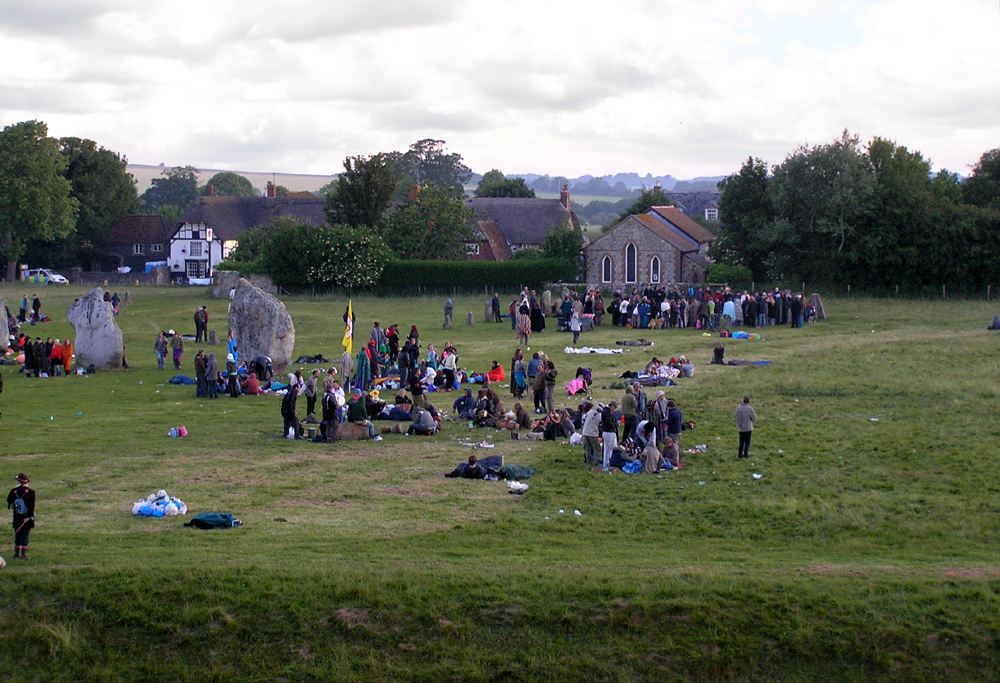