Fun places to be at the Summer Solstice

1. Stonehenge - in the magnificent circle with 30,000 others - celebrating the midsummer sunrise!
2. Avebury - in amongst the towering stones or standing on the surrounding bank for a panoramic view.
3. Ireland - Newgrange is a brilliant place to be, but you need to win a ticket to gain entry to this one, but you can still join others at standing stones around Drombeg, Beara and Kenmare to watch how they align with the sun on the 21st.
4. Orkney, Scotland - week long festival of music, literature and drama at the St Magnus Festival - watch the midsummer sunrise from the amazing Ring of Brodgar.
5. Sweden - 'Midsommar' is celebrated traditionally - often wearing traditional folk costumes - around the Majstång, a tall maypole covered with flowers, and fun solstice parties with lots of vodka are held in Gotaland and the Oland islands.
6. Finland - 'Juhannus', Finland's Flag Day is also celebrated on the same day, so Finnish flags are displayed all around the country from Midsummer's Eve to the evening of the following day. Bonfires (kokko) are lit and maypoles are danced around - originating from old rituals of fertility, cleansing and the banishing of evil spirits. Homes are decorated with flowers and birch branches.
7. Reykjavik, Iceland - many gather to celebrate the midnight sun on the longest day of the year. The solstice comes after a month of endless sunshine, during which the sun never sets. Feasting and partying continues through the early hours of the midsummer morning.
8. Denmark - St. John's Eve is celebrated the night before the Summer Solstice - bonfires on the beach, by lakes and in parks with picnics and songs are traditional.
9. Poland - 'Noc Swietojanska', St. John's Night on midsummer's day it is traditional for the men to dress up as pirates, and for the girls to throw Solstice wreaths made of wild flowers into the Baltic Sea, lakes or rivers.
10. Latvia - 'Jani' is an important national holiday, celebrated with bonfires, drinking beer, singing and jumping over the bonfire wearing wreaths made of flowers for girls and oak leaves for the men. It is also traditional to attach small oak branches with leaves to cars.
At the North Pole, and everywhere north of the Arctic circle (66'30" degrees north latitude) the Summer Solstice means 24 hours of daylight - a good reason to party!

Over 24,000 people celebrated the Summer Solstice 2007 at Stonehenge

Wednesday 20th June found thousands of us wending our way that drizzly evening across the Salisbury Plains, to gather together with Druids, Pagans and King Arthur Pendragon within the mighty megaliths of Stonehenge.

The Summer solstice is one day that we can touch the cold towering slabs of stone - no climbing is allowed, but a gentle stoney hug is OK! English Heritage have been allowing 'Open Access' to the circle for 8 years and tonight the fences have been taken down ready for the midsummer celebrations.

There was only one rain shower during the solstice vigil and most people had come prepared with capes, various hats, horns, hoods and umbrellas! The music kept going through the night and included a saxophone along with pipes, guitars and rhythmic drumming. The atmosphere was brilliant as always and people who had only just met joined together to celebrate the dawning of the longest day of the year.

People come to the Stonehenge Summer Solstice for many reasons - to experience the spiritual atmosphere from within the towering sarsens and to see the sky lightening over the Heel stone as dawn approaches; to enjoy the huge buzz of one of the biggest all night open-air midsummer parties; to be themselves on this magic night and to let their hair down, as our ancestors did as nature's great wheel turned through another season.

A bank of cloud descended during the early morning and unfortunately obscured the midsummer sunrise this year. The edge of the clouds had a reddish glow! A happy solstice was still had by all, despite the unpredictable British weather. Many brave souls were planning on continuing the party at Glastonbury Festival.

The solstice celebrations happened around sunrise at 04.58am.

It was one of the wettest solstices ever, but most brave souls weathered the downpour from 2am to 3am, and were rewarded with the sun breaking through the cloud to light up Stonehenge and all of us (rain-soaked but happy) waiting to celebrate the beginning of the longest day.

The atmosphere and the company was brilliant as ever! 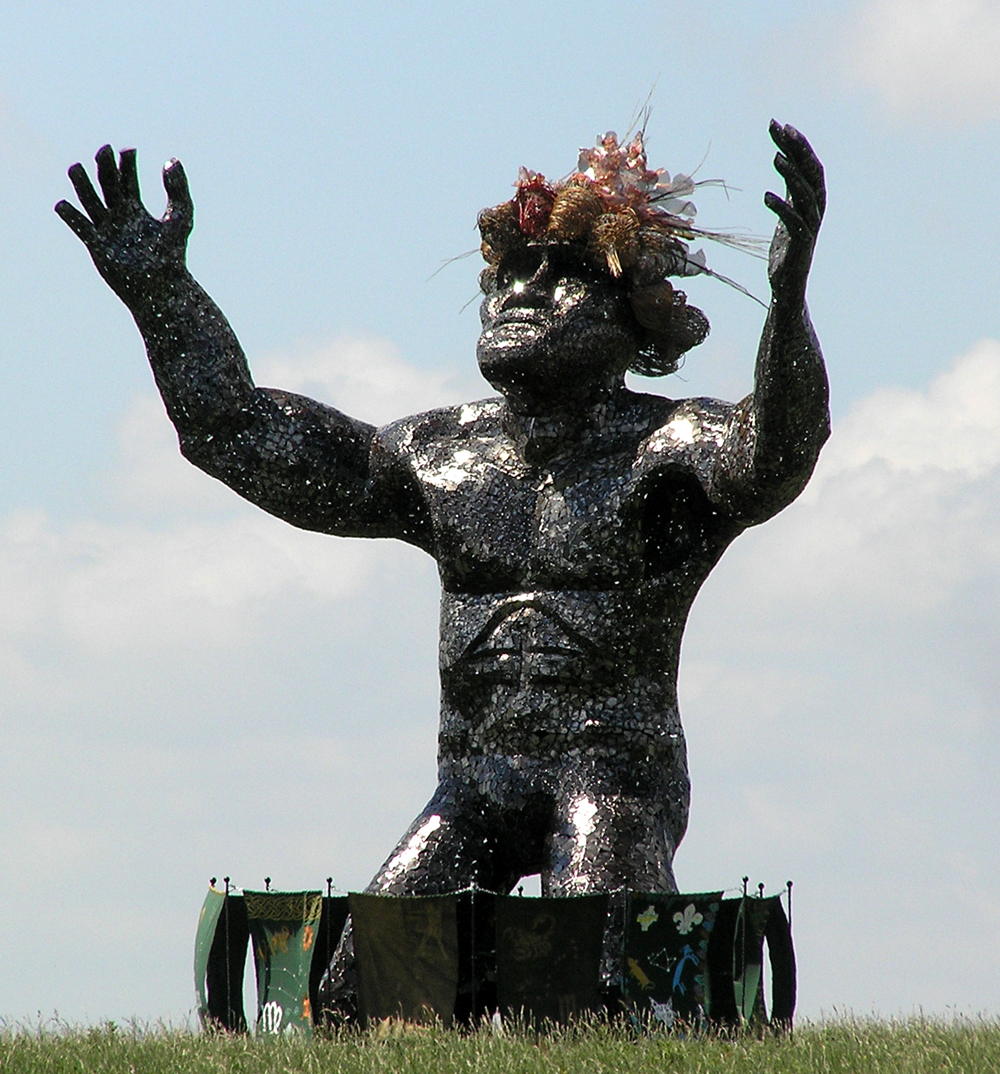 O thou who passest thro' our valleys in
Thy strength, curb thy fierce steeds, allay the heat
That flames from their large nostrils! thou, O Summer,
Oft pitched'st here thy goldent tent, and oft
Beneath our oaks hast slept, while we beheld
With joy thy ruddy limbs and flourishing hair.


Beneath our thickest shades we oft have heard
Thy voice, when noon upon his fervid car
Rode o'er the deep of heaven; beside our springs
Sit down, and in our mossy valleys, on
Some bank beside a river clear, throw thy
Silk draperies off, and rush into the stream:
Our valleys love the Summer in his pride.

Our bards are fam'd who strike the silver wire:
Our youth are bolder than the southern swains:
Our maidens fairer in the sprightly dance:
We lack not songs, nor instruments of joy,
Nor echoes sweet, nor waters clear as heaven,
Nor laurel wreaths against the sultry heat.