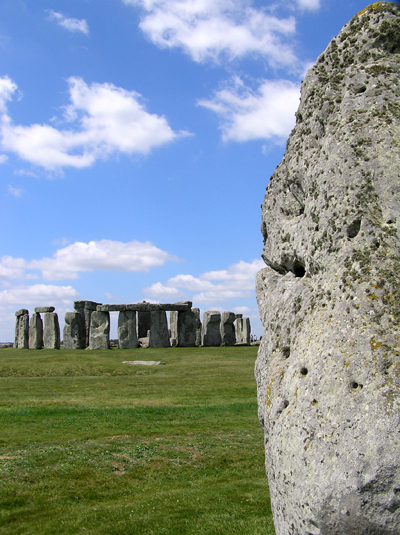 Stonehenge is a magnificent Neolithic monument near Amesbury, Wiltshire, built high on the windswept chalky Salisbury Plain. It is now widely accepted that there were three constructional phases, beginning around 2950 BC to 1500 BC.

The reason for Stonehenge remains a perplexing puzzle - was it built as a pagan temple - a sacred place for ceremonies or rites of worship involving the sun or moon, or intended as a calendar or an astronomical observatory? Many long to find out about the Stonehenge mystery or learn more about the ancient rites that were carried out at Stonehenge by our ancestors.

The prehistoric stone circle was believed to have been erected around 2600 BC, and in various stages. Archaeologists continue to discover more about how these vast masses of stone were hauled into place and when, but we will never really know what Stonehenge was used for.

Stonehenge - Temple of the Sun

During the midsummer solstice we gaze out of the sacred circle to see the sun rise over the Heel Stone, and the first rays shine into the centre of the monument between the stones of the trilithon horseshoe.

Was this seen as a visual re-enactment of the sacred marriage between Heaven and Earth? ...the Sun God's rays penetrating the Earth Mother - the stone circle, with the Heel stone casting a powerful phallic shadow.

Some believe the Heel, or Hele, stone - an outlying sarsen - was originally part of a pair that was intended to perfectly frame the midsummer sunrise. The Anglo Saxon verb 'helan' meaning 'to conceal' could be connected with the naming of this stone - it conceals the sun rising on the summer solstice.

At the midwinter solstice the setting sun sinks between the two uprights of the largest trilithon and behind the altar stone - thought by many to symbolize the death of the year. The shortest day of the year would have been important to a community whose livelihood depended heavily on agriculture. The winter solstice brought reassurance that Spring would again follow, and that life and growth would continue.

There are many stellar correlations as well as the sun and moon alignments at Stonehenge. There are solar alignment points not only within the stone circle, but beyond these with the outlying Heel and Slaughter stones.

Timothy Darvill, professor of archaeology at Bournemouth University, has recently revealed research that he believes shows that Stonehenge was an ancient healing place. In his new book 'Stonehenge: The Biography of a Landscape' the professor cites that human remains excavated from burial mounds near Stonehenge, reveal that many of the buried had been ill prior to their death. The remains also seem to have come from far and wide, like the Amesbury Archer who originated from what is now known as Switzerland. The professor believes that Stonehenge would have been mainly used during the winter solstice, when our ancestors believed it was occupied by Apollo, the Greek and Roman god of healing. Layamon's poem, 'Brut', written around AD1215 seems to reinforce this use of Stonehenge, and is one of the earliest megalithic poems.

Some believe that the early Stonehenge was re-aligned into a solar monument instead of being a pointer for lunar movements.This was apparently achieved by moving the entrance constructed thousands of years before and re-aligning the axis, so the focus became solar.

The rising moon was believed to have been seen as a symbol of ancestral spirits being liberated from their bones and earthly existence. The lunar alignment becomes apparent with the most northerly rising of the full moon at mid-winter.

This large stone is not a bluestone or sarsen. It is micaceous sandstone - containing thousands of light reflective particles of shiny mica. Though this important stone is now fallen and we can only see the upper surface, when it was standing 3 metres high inside the circle it may have acted like a mirror reflecting back the rays when the midsummer sunrise shone into the centre of Stonehenge.
Was this intended as an offering of the energizing light and warmth back to the Sun God from the people's temple?

Although Stonehenge is not the world's largest stone circle (Avebury, constructed between 2800 and 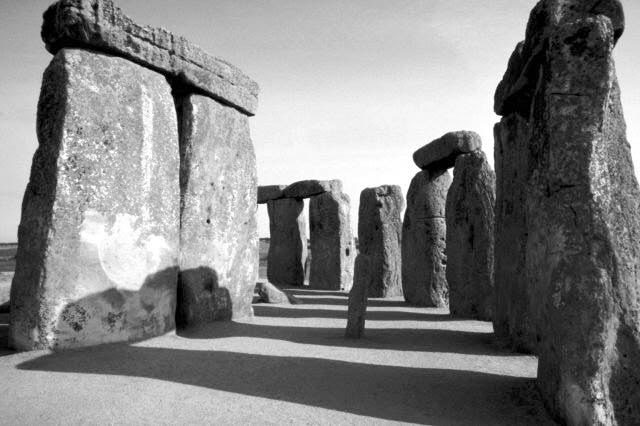 'Stonehenge' is believed to be the Old English word for 'hanging stone'. The lintels are fixed end to end by tongue and groove joints and firmly held on top of the standing sarsens with mortice and tenon joints.

Such construction skill is one of the reasons that part of the circle is still standing after thousands of years. Unlike other stone circles Stonehenge reveals careful shaping, smoothing and tapering of the stones. The outer circle's lintels are even curved to follow the line. The Heel Stone is the only naturally shaped sarsen. Stonehenge is more than a stone circle - it is architecture with aesthetic appeal, and the wonder of Western Europe.

Another mystery is the use of bluestones - so called because they look blue when wet - from the Preseli Mountains in South Wales. The stones weighed up to 4 tons each and about 80 blocks and slabs were used. They are believed to have been transported the 240 miles to Salisbury Plain by roller and sledge on land, and on rafts along the coast. Perhaps the stones came from another circle or their location was believed to be of spiritual or magical importance, we can only guess.

Recently, archaeologists have - through isotope analysis of teeth - discovered that three of the remains found in a 2,300 year-old grave close to the Stonehenge site are most probably Welshmen, and were likely to have been involved in the construction of the monument. 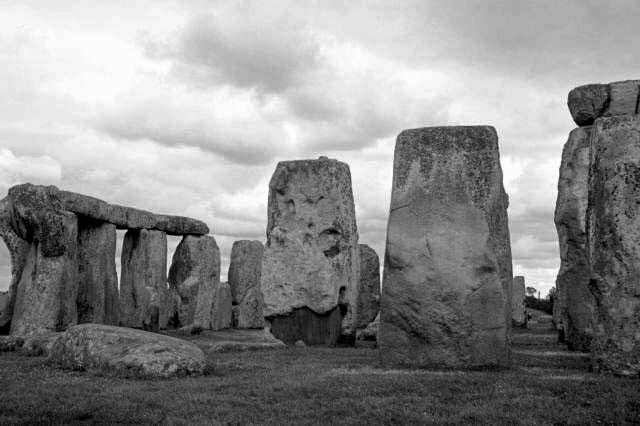 It is believed from the writings of Romans such as Tacitus and Julius Caesar that the Druids were a priesthood of the early Celtic religion. Archaeological findings date Stonehenge to more than 1,000 years before the rise of Druidism.

However, in the 17th Century John Aubrey made the connection of the ancient Druids to Stonehenge. This idea was very popular in the Romantic Age and produced wonderful poems and paintings of Stonehenge.
Other antiquarians such as William Stukeley also suggested the evocative standing stones were a Druidical temple. The connection persists with myths of Pagan Slaughter Stone rituals - in reality believed by archaeologists to be a fallen standing stone.

The gathering of the Druids from various orders during the solstices at Stonehenge brings great interest from the public and media. Their peaceful ceremonies enhance the sacredness and spiritualism of this prehistoric temple, as like others they celebrate the powerful energy of this noble monument.

'The Druid's groves are gone - so much the better.
Stonehenge is not, but what the devil is it?'

The stones are believed to be petrified dancing giants who were caught in a sunbeam. The stone circle is said to resemble the giants holding hands, and in folklore is known as the 'Giants' Ring'.

The stones were renown for their healing properties. If you sat under the stones and water was poured over them then your wounds would be healed.

It is supposedly impossible to count all the stones. The devil once bet that no one in the nearby village would be able to come up with the right answer. However, a monk replied 'more than could be told'. The devil angrily threw one of the stones at the monk and it bounced off the back of his foot - the outlying stone was then named the Heel Stone 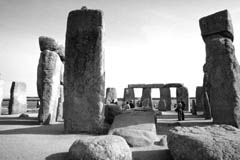 Merlin and the Giants' Dance

In the 12th Century Geoffrey of Monmouth's History of the Kings of Britain stated that the stones were originally brought from Africa to Ireland by a race of giants. Later the wizard Merlin apparently moved the standing stones - the 'Giants' Dance' as Geoffrey called them - from Killaraus, a mountain in Ireland, to Salisbury Plain. They were to provide 'an everlasting monument' to the nobles that had been massacred by the Saxons.

The last man to own Stonehenge was Cecil Chubb - he purchased the stones in 1915 for £6,600.
Three years later he made a gift of the stone circle to the nation, with the proviso that admission to locals should be free. This continues today and includes the residents of all the parishes of the former Amesbury Rural District. Close visitor contact with the stones has been prohibited since 1978, apart from the annual Open Access for the solstices and out-of-hours private visits - where you can step inside the fenced path encircling the stones for a price.

Some suspect that Stonehenge was built for elite gatherings, as experts believe that most sound would have remained inside the circle. Perhaps the priests controlled a larger crowd by climbing up onto the great trilithon where they could be seen and heard by all? We can only guess at the motives behind the creation of Stonehenge's colossal magnificence. It remains an amazing focal point in a landscape of burial mounds and barrows - a ritual space and monument - a celebration of man's abilities on earth.

No conclusive answers have solved the paradox of this evocative megalithic art and it continues to fascinate generations remaining one of the world's most important Neolithic sites. These immense portals are a door to our past. The henge will remain a palpable yet mystical connection. For many, the reason behind this awe-inspiring creation does not matter - it belongs to us all, a 'people's temple' - a place of sanctity, and remains the world's best-loved stone circle.